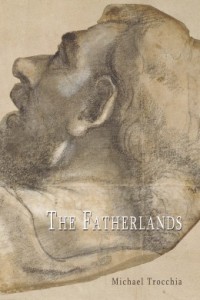 Trocchia offers a series of prose poems and short fictions on the mystery of origins and the varieties of estrangement.

“Like de Chirico’s barren landscapes, which are populated mainly by classical sculptures and other antiquities, the weight of the past—the metaphorical marble busts and architectural remnants that are everywhere in this chapbook—loom large over Trocchia’s meditative work…” Read the full review here

“The Fatherlands is not so much a poetry book as it is a guide to a way of thinking that moves beyond the sad possessiveness of our epoch. It does this in its essential fabric, in the mechanism by which objects are used and described, in the basic manner of assigning meaning and value. Trocchia’s mastery of these modes is sure and unfaltering, his invention tireless. Pay attention to this man.”

– Jesse Ball, author of Silence Once Begun and A Cure for Suicide

“Michael Trocchia’s The Fatherlands is beautiful, its narrative threads graceful and lithe.”

“Trocchia’s The Fatherlands is not an easy book to categorize…it is a witty, evocative, and perceptive meditation on the ties—sometimes deep, sometimes accidental—that join persons to families, families to territories, territories to texts, and texts to literatures.”